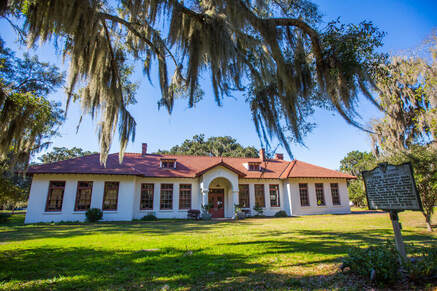 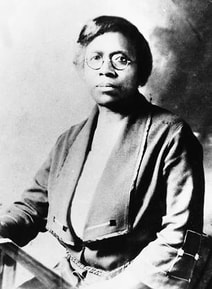 Dr. Matilda Evans
​     Matilda Arabella Evans, who graduated from the Woman's Medical College of Pennsylvania (WMCP) in 1897, was the first African American woman licensed to practice medicine in South Carolina. Evans's survey of black school children's health in Columbia, South Carolina, served as the basis for a permanent examination program within the South Carolina public school system. She also founded the Columbia Clinic Association, which provided health services and health education to families. She extended the program when she established the Negro Health Association of South Carolina, to educate families throughout the state on proper health care procedures.
Matilda Arabella Evans was born in 1872 to Anderson and Harriet Evans of Aiken, South Carolina, where she attended the Schofield Industrial School. Encouraged by Martha Schofield, the school's founder, Evans enrolled in Oberlin College in Ohio, attended on scholarship for almost four years, and left before graduating, in 1891, to pursue a medical career.
After teaching at the Haines Institute in Augusta, Georgia and at the Schofield School, Evans enrolled at the Woman's Medical College of Pennsylvania in 1893. She received her M.D. in 1897 and returned to Columbia, South Carolina, where she established a successful practice. As the first African American woman licensed to practice in South Carolina, she treated both white and black patients, and was in great demand. She practiced obstetrics, gynecology, and surgery, and cared for patients in her own home until she established the Taylor Lane Hospital (the first black hospital in the city of Columbia) in 1901. By 1907 Dr. Evans was able to write to Alfred Jones, Bursar at Woman's Medical College of Pennsylvania, "I have done well, and have a very large practice among all classes of people... I have had unlimited success... Since I have returned to my native state, others have been inspired and have gone to our beloved college to take degrees." She was writing on behalf of a promising young African American woman who wanted to attend WMCP but was in need of scholarship assistance.
Evans ran her own farm and founded a weekly newspaper, The Negro Health Journal of South Carolina, and offered a program of recreational activities for underprivileged boys. Dr. Evans was elected president of the Palmetto State Medical Society and vice president of the National Medical Association, and in World War I was appointed to the Volunteer Medical Service Corps.
source: https://cfmedicine.nlm.nih.gov/physicians/biography_107.html 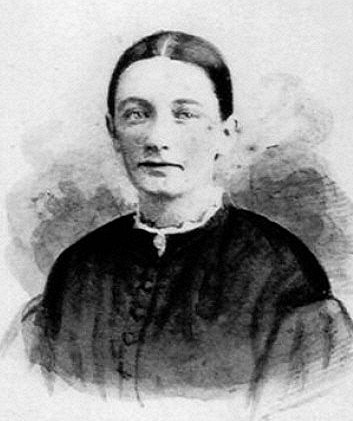 Laing High School was founded in 1866 by Cornelia Hancock, a Quaker from New Jersey, to provide schooling for formerly enslaved people.
​From Diane Rowley, currently a member of Atlanta Friends Meeting: “Laing School was the one my husband Bill Jenkins attended after it became part of the public school system. His grandmother and mother matriculated there when it was still under the care of Quakers.  Bill recalled that the first book he enjoyed was an old Quaker reader that his grandmother had.  In the early years of his career Bill was one of the people who tried to end the Tuskegee Study of Syphilis in the Negro Male.  Later when he was a senior epidemiologist he became director of the Tuskegee Benefits Program office, the office at CDC that provided benefits and services to the men and he launched a work group that secured a Presidential apology from Bill Clinton for the study.”
Laing School Website 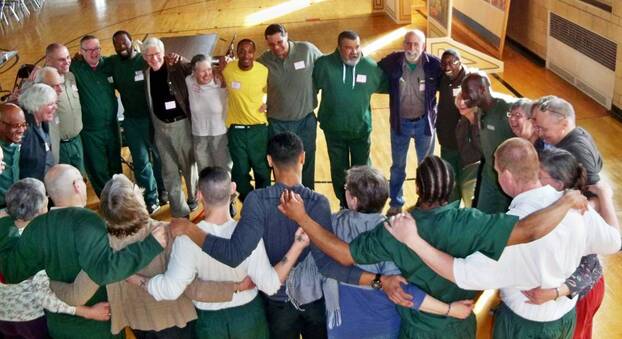 Alternatives to Violence Project Program
Columbia Friends Meeting began an Alternatives to Violence program in 2015. Since then, they have conducted workshops at Estill prison, the Department of Juvenile Justice Bush River, and Trenton State CI. They have been asked to do programs at Edgefield FCI, Ridgeland, Camille and Manning. Unfortunately, the COVID virus has stopped the trainings for the time being. For information on how to take part in this program, contact Lynn Newsom at lynewsom@gmail.com. See also the "News" tab. 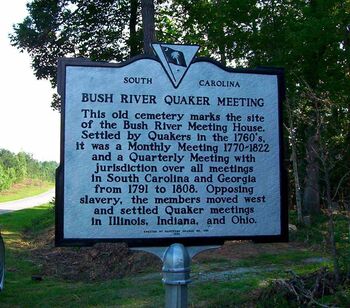 The graveyard is the final resting place of hundreds of the early settlers of Bush River, who originally came from Quaker communities in Pennsylvania,  New Jersey, Maryland and North Carolina.  When the meeting was laid down, in 1822, most of the Friends from Bush River had already moved to Ohio, Indiana, Tennessee and Alabama.  Whether impacted by the hostilities of the Revolutionary war, or displaced due to the slavery, the remnants of the Quaker community left the community or assimilated into other area churches.
The five-acre cemetery, located at 1828-3346 State Road S-36-60 (Dennis Dairy Road), Newberry, SC 29108 is deeded to North Carolina Yearly Meeting of Friends.  The Bush River descendants group, energized by Judith F. Russell, has followed up on cemetery care.  Columbia Friends Meeting scheduled clean-up outings for several years prior to that.  Downed trees from storms and poison ivy had begun to take over.  Regular landscaping maintenance was organized by the Bush River descendants group.  “Reunions” were held and the now eleventh printing of The Historic Bush River Quaker Cemetery is available for purchase.
The Bush River Descendants group has created rich genealogical resources, which are available
at http://bushriverquakers.blogspot.com and on Facebook at http://www.facebook.com/groups/849196008520904/?ref=bookmarks
To order a copy of the Cemetery book, with history and maps, write to Judith.f.russell@gmail.com,  at 1151 Fairway Gardens NE,  Brookhaven, GA 30319.  Donations for cemetery clean up and maintenance can also be sent to this address with checks written to Quaker Cemetery Clean Up Fund.
Further information is available at http://archiver.rootsweb.com/th/index?list@scbushriverquakers.com
As one of the last remaining preserved historical locations of Quakers in South Carolina, Bush River Cemetery has special meaning for Palmetto Friends Gathering.
Submitted by: Grace Gifford
Eighth Month, 7th, 2020
​
Early Photographs of Palmetto Friends Gathering 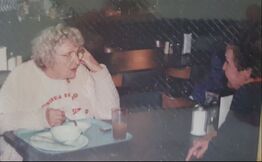 ​Helen White at first the first Palmetto Friends Gathering on Martin Luther King Day in 1990. Helen and her husband Edwin lived in Colombia, SA, for some years when they taught at a Mennonite School located out from Bogotá. 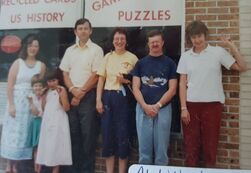 ​Horry Friends Meeting, circa 1991, at the Surfside Beach shop
of a then-attender. 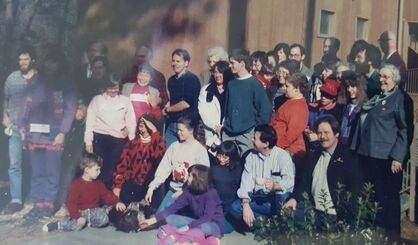